KINNEGAR BREWING – ACCIDENTAL DISCOVERY TO BEER OF THE MOMENT!

My first experimentation with Craft Beer came about around about 7/8 years ago on a trip to visit the folks who were living in western New York State at the time. Being extremely fussy about his choice of beers and having a dripping disdain for the industrial beers that invariable are common place in “lite” form in the US, I always wondered how the old man would get on when they first relocated to the US. However, I got my answer when on the first full day there he took me on a trip to see the local craft beer section of the local supermarket. To say my narrow mind (on the subject of US beer) was completely blown by the sheer scale and variety of the craft beers on offer there is an understatement, walk in fridge aside, the layout of the dedicated area of the supermarket with specific sections for different types of beers and different regions (much like we have become accustomed to with wine in Irish supermarkets) gave me a real appreciation of the massive demand for really high quality micro-brewed beer and also the opportunity to begin sampling the same myself!

Fast forward those 7 or 8 years and I found myself wandering around my local off licence of choice, that does a fantastic range of craft beers, wondering what to sample that evening. Crippled by indecision as a result of the choice I took the easy option and picked up a six pack of Blue Moon (not my top choice of beer but familiar because of the US experience and at a tenner for six it eased my indecision to a degree!) and tipped over to the counter. The great thing about said off licence is that it is staffed by the bar staff so they know a little about beer, so spotting my choice of purchase and the fact that I was in deep thought not three minutes beforehand about what it was exactly I wanted, the barman suggested that I try some new stuff that they had in, brewed “by some American chap in Donegal”, as “it’s a tasty oul drop”. Working on the basis that he probably knew what he was talking about I took a selection of Limeburner Pale Ale and Scraggy Bay IPA (and also the six pack of Blue Moon just in case).

Kinnegar Brewing are based in Rathmullan Co. Donegal and brew a variety of really nice Ales, a Porter and some seasonal brews. It’s still on my list of places to visit, but as I understand it, this is a true micro brewery in terms of volume and setup but at the same time is producing and impressive array of beers. But back to the beer….

I started my sampling (read slugging out of the bottle) with the Limeburner Pale Ale. I’m no expert (as you can probably already tell) but for me this was a solid Pale Ale, a little hoppy and entirely drinkable without being spectacular. Having had it subsequently I would say that it was perhaps too cold on that first occasion trying it out which kind of smothered the hoppiness. However, I subsequently have sampled some of a special batch call Unity Pale Ale brewed again by Kinnegar and it for me was probably slightly better, despite being lesser  alcohol content, as it was a little crisper.

Following on from the Limeburner, I next sampled Scraggy Bay IPA. This one was a real winner with me, slightly stronger, hoppier taste that is a little difficult to describe aside from saying it was slightly sweet to taste with an almost crunchy finish. This was certainly way more to my liking and is certainly in my top 5 beers of all time in terms of taste and finish.  Following on from my initial exposure I had the good fortune of meeting the guys from Kinnegar at Bloom in the Park.

After spending an hour doing the food bits of the festival, making a pig of myself with the free samples, and rapidly running out of opportunity to avoid the flowers / garden-y bit of the festival I spotted the craft beer marquee on the horizon like a shelter for dehydrated blokes desperate to avoid looking at gardening stuff that would inevitably lead to manual labour in their own gardens and make a break for it (with my 2 year old in tow). I appreciate how this probably looked to any bystanders, slightly relieved looking bloke half sprinting with a buggy to the beer tent at 11am in the morning, but it did give a good opportunity for a chat with the guy from Kinnegar who was just setting up and get an understanding of their range of beers and a first hand explanation. I won’t pretend to remember anything that was said as I was in a state of delirium from the excitement of the opportunity to buy beer, the fact I was putting off the gardening bit for a few minutes and the lovely Jenny telling me to buy a few different beers to bring home, but it did give me something to think about in terms of my next “sampling”.

At this stage I am rambling a little based on the outpouring of admiration for this beer but bear with me….

The weekend after Bloom, I found myself in the local with Jenny, the same local as the aforementioned off licence, and she spotted that they had Rustbucket Rye Ale on special offer in the lounge. I am not usually a massive fan of “Rye” anything but times may be changing. I can safely say I had a beer epiphany that night. Rustbucket is a distinctly hoppy, yet balanced ale with no killer aftertaste and a really nice sweetness that is not overpowering or sickly but definitely different. It has a slightly red hue when poured but I have to say I really enjoyed it straight from the bottle. What’s more, after quite a number of these, I felt fresh as a daisy the following morning, (and with 2 toddlers, my mornings start early!) So, this is without doubt probably my favourite beer of the moment….if only it were more widely available!! 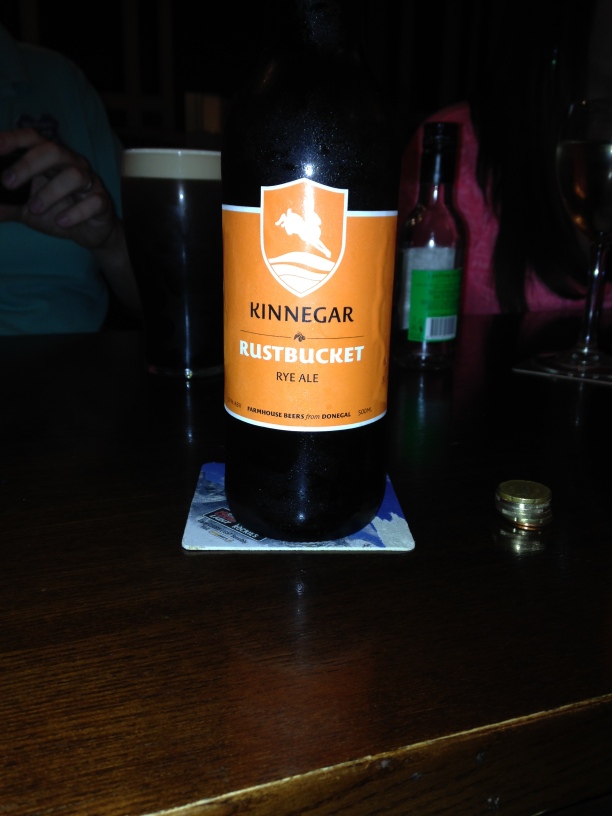 So there you have it,

And if you get a chance, and you can find it on draft, give the Yannaroddy porter a try…I only had a small sample and I could be very much tempted to try lots more if I could get my hands on it on draft!

And don’t forget to check them out at http://kinnegarbrewing.ie/